Beyond Fear and Rage 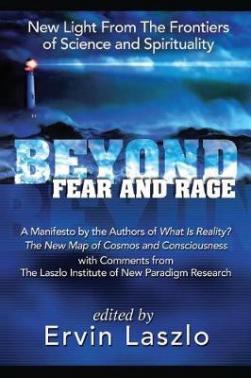 Published by Waterfront Press
Buy from:

The Messages conveyed in this Manifesto are by leading exponents of the new paradigm that comes to light at the cutting edge of contemporary science and lived spirituality. They are explorations and examples of the thinking we need to understand the nature of the problems and their possible solutions—and then finding the solution by ourselves. This kind of thinking could replace irrational fear and blind rage with deeper understanding and informed behavior. It could orient our aspirations, our values, and thus our steps. In these extraordinary times this is the kind of thinking we need—in our most urgent and best interest.

Ervin Laszlo, is Director of the Laszlo Institute of New Paradigm Research (Italy), Founder and President of The Club of Budapest, Fellow of the World Academy of Art and Science, Member of the Hungarian Academy of Science and the International Academy of Philosophy of Science, Senator of the International Medici Academy, and Editor of the international periodical World Futures: The Journal of New Paradigm Research. He is the recipient of the Goi Peace Prize (2002), the International Mandir of Peace Prize (2005), the Conacreis Holistic Culture Prize (2009), the Ethics Prize of Milano (2014) . Laszlo is Honorary Professor of the Buenos Aires Institute of Technology and Honorary Citizen of the City of Buenos Aires and holds Honorary PhD’s from the United States, Canada, Finland, and Hungary. Laszlo is the author or co-author of fifty-four books translated into twenty-four languages and was nominated for the Nobel Peace Prize in 2004 and 2005.