Macroshift: Navigating the Transformation to a Sustainable World 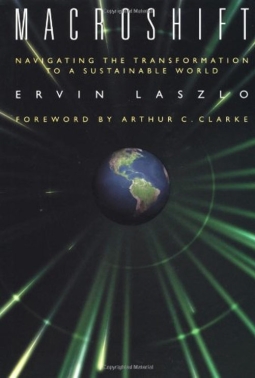 Published by Berrett-Koehler Publishers
Buy from:

The world is growing together in some respects, but is coming apart in others. Worldwide economic globalization, another sign of the macroshift, all too often benefits the few rather than the many. Hundreds of millions live at a higher material standard of living, but thousands of millions are pressed into abject poverty. The richest 20% earn ninety times the income of the poorest 20%, consume eleven times as much energy, and eat eleven times as much meat.

There have been other macroshifts in human history, but they spanned centuries, allowing cultural values, beliefs, and change to occur gradually. Today, technology has reduced our time to adapt; the entire critical period of change is compressed into the lifetime of a generation.

Today's macroshift, explains Laszlo, harbors great promise, as well as grave danger. He outlines two possible scenarios: "The Breakdown," where we choose to drift without a change in our current direction toward chaos, anarchy, and destruction, or "The Breakthrough," where we collectively transform our thinking and behavior to produce creative, sustainable solutions to dangerous global problems. And he shows what each of us can do-politically, professionally, and privately-to bring about the Breakthrough and shape a humane and sustainable global future.

While technology is what drives the unprecedented speed of this macroshift, it is our vision, values, and actions now that will ultimately determine the outcome. The choice is up to us-the power is in our hands.

Ervin Laszlo, a pioneer in complex systems philosophy and general evolution theory who has written or cowritten 36 books, believes we are in the midst of a massive worldwide transformation that will dramatically alter everything from lifestyle to economy. Such total upheaval has occurred only a few times before, he says, and in Macroshift he explains what this might mean and how we might manage its impact.

The gist, according to Laszlo, is that technology and globalization have unbalanced social structures, upended values and priorities, sparked resource exploitation, and "downgraded the livability" of our planet. The result is an unsustainable situation that could trigger political conflict, financial vulnerability, and deteriorating environmental problems during the coming decade unless "a new way of thinking" takes hold. "If we are not to join the myriad species that had once populated the Earth but became extinct," he predicts, "we will have to create a civilization that is more adapted to the conditions in which we find ourselves."

He then offers ideas to do so, including a shift from "competition to reconciliation and partnership" and development of "more responsible and humane community projects" around the world. The proposals are not for everyone, but if Laszlo is correct, this book offers serious food for thought that we all would be wise to ponder. --Howard Rothman  --This text refers to an alternate kindle_edition edition.

"In Macroshift Ervin Lazlo makes a vital point: the future is not to be forecast, but created. What we do today will decide the shape of things tomorrow. Especially the way we perceive the challenges that await us, and the vision we develop for coping with them. His book furnishes essential guidelines for creating a positive scenario for our common future: for the new thinking and acting that this calls for." —From The Foreword by Arthur C. Clarke