Science and the Akashic Field: An Integral Theory of Everything 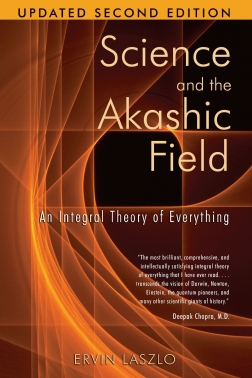 Science and the Akashic Field: An Integral Theory of Everything
Published by Inner Traditions/Bear & Company
Buy from:

Mystics and sages have long maintained that there exists an interconnecting cosmic field at the roots of reality that conserves and conveys information, a field known as the Akashic record. Recent discoveries in vacuum physics show that this Akashic Field is real and has its equivalent in science’s zero-point field that underlies space itself. This field consists of a subtle sea of fluctuating energies from which all things arise: atoms and galaxies, stars and planets, living beings, and even consciousness. This zero-point Akashic Field is the constant and enduring memory of the universe. It holds the record of all that has happened on Earth and in the cosmos and relates it to all that is yet to happen.

In Science and the Akashic Field, philosopher and scientist Ervin Laszlo conveys the essential element of this information field in language that is accessible and clear. From the world of science he confirms our deepest intuitions of the oneness of creation in the Integral Theory of Everything. We discover that, as philosopher William James stated, “We are like islands in the sea, separate on the surface but connected in the deep.”

“This important work unifies the realms of science and consciousness in a truly integral ‘theory of everything.’”
--Ralph Abraham, Ph.D., professor of mathematics, University of California, and coauthor of Chaos, Creativity, and Cosmic Consciousness

“A seminal book from one of the best thinkers of our time. Ervin Laszlo charts the ­frontiers to which science is inexorably headed. In years to come people will look back at the amazing foresight of this work.”
--Peter Russell, fellow of the Institute of Noetic Sciences and the Findhorn Foundation and author of From Science to God

“With extraordinary intellectual clarity, Laszlo provides a vision that links the best of modern science to the wisdom of the great spiritual traditions.”
--Stanislav Grof, M.D., Ph.D., president and founder of the International Transpersonal Association and author of The Holotropic Mind