Simply Genius!: And Other Tales from My Life 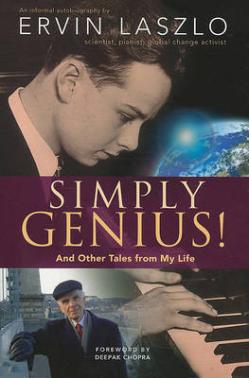 Simply Genius!: And Other Tales from My Life
Published by Hay House, Inc.
Buy from:

Ervin Laszlo was a child prodigy on the piano and grew up to become an internationally celebrated virtuoso. By the time he reached his 40s, however, he had become a famous scientist and philosopher, and had written a dozen books and more than a hundred articles. He also taught at major universities in Europe, the U.S., and the Far East. Shortly thereafter, he gained world renown as a global visionary, heading research programs at the United Nations and founding an international think tank (the Club of Budapest).

But this book is not an autobiography in the traditional sense. In Laszlo’s own words: “I don’t like talking about myself, about what makes me tick and why. Writing about all the things that have happened to me is different. This is storytelling—the telling of a real, lived story: my story, as it unfolded over the years.”

Join the author on his remarkable journey from his days as an internationally acclaimed concert pianist . . . to his profoundly personal quest to effect positive global transformation!