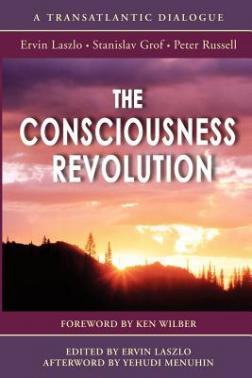 A Transatlantic Dialogue
Published by Elf Rock
Buy from:

As we enter the 21st Century faced with current global and human crises, society is being questioned as never before. In The Consciousness Revolution, three pioneers at the cutting-edge of Western thought reflect on the chances of peace in the world, on how society is changing, and on the changes we can make in ourselves. They consider the roles of art, science, education, goals and values, world views, religion, spirituality and, above all, consciousness - for the state of our consciousness is the key issue underlying almost everything else.

As Ken Wilber asks in his Foreword, what does it all finally come down to? Peter Russell puts it like this: 'Each little bit counts we are all part of the same ground-swell. The most important question we need to ask is how can I put my own life in greater alignment with that ground-swell? How can I do my little one-hundred-thousandth worth to facilitate that shift a bit further?

These intense and memorable discussions among three of the finest minds of our time convey a sense of excitement and passion which we can carry forward in our own lives. The Consciousness Revolution is an essential guide to how our map of reality is changing in the midst of the global transformation going on in all parts of the world and in every sphere of life, in us and around us

"The Consciousness Revolution is an extrodinary discussion among three of the very finest minds of our time, spirited in its exchange, compassionate in its embrace, brilliant in its clarion call to awaken our conscience and consciousness." Ken Wilber, author of Sex, Ecology, Spirituality and One Taste

Peter Russell earned degrees in theoretical physics and psychology at the Cambridge University in England, where he studied for a time under Stephen Hawking. He is the author of the bestselling books The Global Brain and The TM Technique, as well as The Brain Book and From Science to God. He lives in Sausalito, California.

Stanislav Grof, M.D., is a psychiatrist who has been principal investigator at the Psychiatric Research Institute in Prague, Chief of Psychedelic Research at the Maryland Psychiatric Research Center, and assistant professor of psychiatry at Johns Hopkins University. He is now professor of psychology at the California Institute of Integral Studies. His 20 books include Beyond the Brain, Psychology of the Future, The Cosmic Genius, and Spiritual Emergency. He lives in California. In 2019, Stanislav Grof was cited as one of the 100 Most Spiritually Influential Living People in the World according to Watkins Mind Body Spiritmagazine.

Ervin Laszlo is a philosopher and systems scientist. Twice nominated for the Nobel Peace Prize, he has published more than 75 books and over 400 articles and research papers. The subject of the one-hour PBS special Life of a Modern-Day Genius, Laszlo is the founder and president of the international think tank the Club of Budapest and of the prestigious Laszlo Institute of New Paradigm Research. The winner of the 2017 Luxembourg Peace Prize, he lives in Tuscany. In 2019, Ervin Laszlo was cited as one of the 100 Most Spiritually Influential Living People in the World according to Watkins Mind Body Spirit magazine.