The Laszlo Chronicle: A Global Thinker's Journey from Systems to Consciousness and the Akashic Field 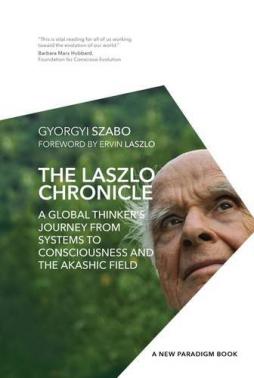 New Paradigm Book of the Laszlo Institute of New Paradigm Research
By Ervin Laszlo
Published by SelectBooks
Buy from:

Laszlo’s search for answers to questions such as man’s relationship to nature and the cosmos, and the nature of underlying factors of evolution which connect all things were not satisfied by working only on the basis of the General Evolutionary Systems Theory. Wittgenstein said “In every serious philosophical question uncertainty extends to the very roots of the problem. We must always be prepared to learn something totally new.” Laszlo did discover something entirely new – the theory of the information field – after immersing himself in a range of areas of study such as cosmology, consciousness studies, quantum physics, metaphysics and various Eastern traditions. The integration of his earlier works with his more recent studies lies behind his explanation of the existence of the Akashic Field.

The Akashic Field is a term that refers to an interactive universe communicating in a subtle manner, which connects everything with every other thing everywhere. This is a pure information field where communication takes place without the need for the transportation of physical energy; thus interaction can occur instantaneously regardless of distance and time. Coherence and consciousness are the bases of Laszlo’s Akashic field. He proposed a ‘system theoretic paradigm’, which focuses on a general understanding of the cosmos and the implications for entities such as human beings. This entails the observation and explanation of human and cosmic evolution as viewed in unity or inter-connectedness where macro and micro are essentially interlinked. Laszlo’s philosophical work extends to sociology when describing concurrent worldwide issues closely related to the existence of the Akashic Field. His humanist ideals are evidenced by his efforts to help humans understand the context and causes for their recent challenges and the possibilities that may lie ahead. Ervin Laszlo’s half-century of exceptional philosophical work gives us the most coherent picture of the nature of the world to date.

Dr. Szabo collaborated with Ervin Laszlo in preparing the annual Conferences of the World Cultural Forum in China and is a member of the Executive Committee of the Club of Budapest France. In 2012, in association with Barbara Marx Hubbard she founded UniverSoul, a Hub for Conscious Evolution, in Paris and serves as its president. Her papers and monographs have appeared inter alia in The Scientific and Medical Network Review, The Shift Network, and World Futures: The Journal of New Paradigm Research.

Ervin Laszlo : Find The Unity from SolefireFilms on Vimeo.