The Self-Actualizing Cosmos: The Akasha Revolution in Science and Human Consciousness 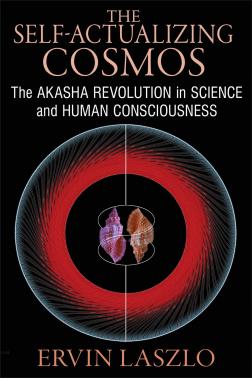 The Self-Actualizing Cosmos: The Akasha Revolution in Science and Human Consciousness
Published by Inner Traditions/Bear & Company
Buy from:

• Reveals the cosmos to be a self-actualizing, self-organizing whole, bringing forth life and consciousness in countless universes

• Explores the latest discoveries in the sciences of life, mind, and cosmos

Science evolves through alternating phases of “normal science” and radical shifts that create scientific revolutions. We saw this at the turn of the 20th century, when science shifted from a Newtonian worldview to Einstein’s relativity paradigm, and again with the shift to the quantum paradigm. Now, as we recognize the nonlocal interconnection of all things in space and time, we find our scientific worldview shifting once again.

With contributions by physicists Paul A. LaViolette and Peter Jakubowski, pioneering systems scientist Ervin Laszlo explores the genesis of the current revolution in scientific thought and the latest findings in support of the Akashic field. He explains how the burgeoning Akasha paradigm returns our way of thinking to an integral consciousness, a nonlinear mode of understanding that enables us to accept the reality of nonlocal interconnection throughout the world. This new inclusive way of understanding reaffirms the age-old instinctive comprehension of deep connections among people, societies, and nature, and it integrates and transcends classical religious and scientific paradigms.

Providing examples from cutting-edge science of quantum-resonance-based interactions among all living systems, Laszlo shows the cosmos of the Akasha to be a self-actualizing, self-organizing whole, where each part is in coherence with all others and all parts together create the conditions for the emergence of life and consciousness. The advent of the Akasha paradigm marks a new stage in science’s understanding of the fundamental nature of the world and offers unique guidance for contemporary efforts to create a peaceful and sustainable world.

“Let this masterful mega-synthesis of frontier science blow the lid off any thinking that keeps you from beholding a cosmos designed to self-actualize. This is the pinnacle of Laszlo’s work and defines him as the most important cosmologist alive today.”, James O’Dea, author of Cultivating Peace: Becoming a 21st-Century Peace Ambassador

“The modern idea of a mindless, purposeless, directionless universe will take its place as a morbid relic in the history of ideas. It is being replaced by the vision expressed in The Self-Actualizing Cosmos. This important book restores hope and meaning and shows that the cosmos is a friendlier home than we have recently taken it to be.”, Larry Dossey, M.D., author of One Mind: How Our Individual Mind Is Part of a Greater Consciousness a

“In his new book, Ervin Laszlo, the world’s foremost systems theorist, summarizes his evolutionary connectivity hypothesis and his concept of the Akashic field. He offers a brilliant solution for the paradoxes and anomalous phenomena that emerged in the course of the twentieth century in a broad variety of fields--from astrophysics, quantum-relativistic physics, and chemistry to biology, anthropology, thanatology, parapsychology, and psychology. In this tour de force, Laszlo’s renaissance intellect spanning a broad range of scientific disciplines offers the reader a breathtaking vision of a self-actualizing cosmos. A book that should not be missing in the library of any scientist seeking to understand the nature of reality.”, Stanislav Grof, M.D., author of Holotropic Breathwork, Psychology of the Future, and When the Imposs

“Forty years ago Ervin Laszlo changed the way we saw the world with his classic book The Systems View of the World. Today he changes the way we understand the cosmos and our own place in it. This is a groundbreaking and very readable work.”, Allan Combs, Ph.D., author of Consciousness Explained Better, Synchronicity, and Radiance of Being a

“The Akasha paradigm, explained in Laszlo’s book, marks a new stage in science and society’s understanding of the world and a way forward to peace and sustainability.”, Ruth Parnell, Nexus, June 2014

“...the concepts and ideas presented in The Self-Actualizing Cosmos are essential reading for anyone seriously concerned with the well-being of the human race and life as we know it on Earth. Highly recommended and thought-provoking!”, Cynthia Sue Larson, New Conciousness Review, June 2014