The Whispering Pond: A Personal Guide to the Emerging Vision of Science 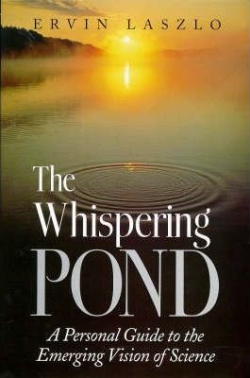 In The Whispering Pond, systems theorist Ervin Laszlo may be trying the same trick -- if we look at things from a systemic point of view, it will all make sense. He seems to do better than the other books; I find The Whispering Pond quite compelling. I'm still not sure whether this is a result of the way Laszlo presents the material, because I already have great sympathy for systems theory, or because he is presenting some remarkable new insights. I suspect it is a bit of all three.

Laszlo shines a flashlight on four areas of science -- the evolution of the universe (cosmology), the nature of matter (quantum physics), life (biological evolution) and consciousness (cognitive science). In Part One of the book, the bright beam of his light shows those areas which have been clearly illuminated by modern science -- it is a lucid, readable, and interesting summary of the state of our knowledge.

In Part Two he examines the partly illuminated, blurry fringes of the beam of light -- The open questions in each of the four areas of science. Scientific knowledge is never complete or final; in this section he outlines what we don't know. In cosmology he questions the Big Bang theory. In physics he explores the mystery of non-locality. In biology he discusses some uncertainties about evolution and the puzzle of morphogenesis. In psychology he explores the mystery of lifetime memory, transpersonal communication, and spontaneous cultural links

In Part Three he looks at various attempts to illuminate these vague, barely seen areas of exploration through the development of grand and supergrand theories in physics and cosmology. He provides a readable and convincing discussion of David Bohm's implicate order; Heisenberg's quantum universe, developed by Henry Stapp; Prigogine's self-organizing dissipative systems, and other views. Following as they do, on his informative discussion of the fringes of science, these speculative theories seem quite plausible.

In Part Four Laszlo finds all these theories lacking and explores possible ways around the problems he sees. He presents a list of paradoxes which are not resolved by either conventional science or by these contemporary theories. He suggests that these paradoxes can be understood if we consider the possibility of subtle connections between all elements in the universe. To the four forces/fields of physics, Laszlo suggests a fifth field which is everywhere and out of which everything arises and returns. This field provides the subtle connections that hold the universe together and allow it to operate as a system. He shows how this idea is consistent with, but goes beyond, the work of Bohm, Brian Goodwin, Rupert Sheldrake, Stanislav Grof, and A. S. Popov. In the final chapters of the book, Laszlo shows how the universal subtle field brings science clearly into the realm of spirituality. He derives a number of surprising and provocative conclusions from the subtle field -- a ground of all being or an essence behind matter, life, and mind.

Laszlo takes the reader smoothly from well-established science to fringe science to something like the interbeing of Buddhists, the path of the Tao, or the pan-entheism of some contemporary Christian theology. He has convincingly shown that some of the insights of traditional spirituality may lead us to new scientific understanding. How have these disciplines been able to find these truths? Because these insights, like everything else, arise from the subtle field, like bubbles rising in a pond.